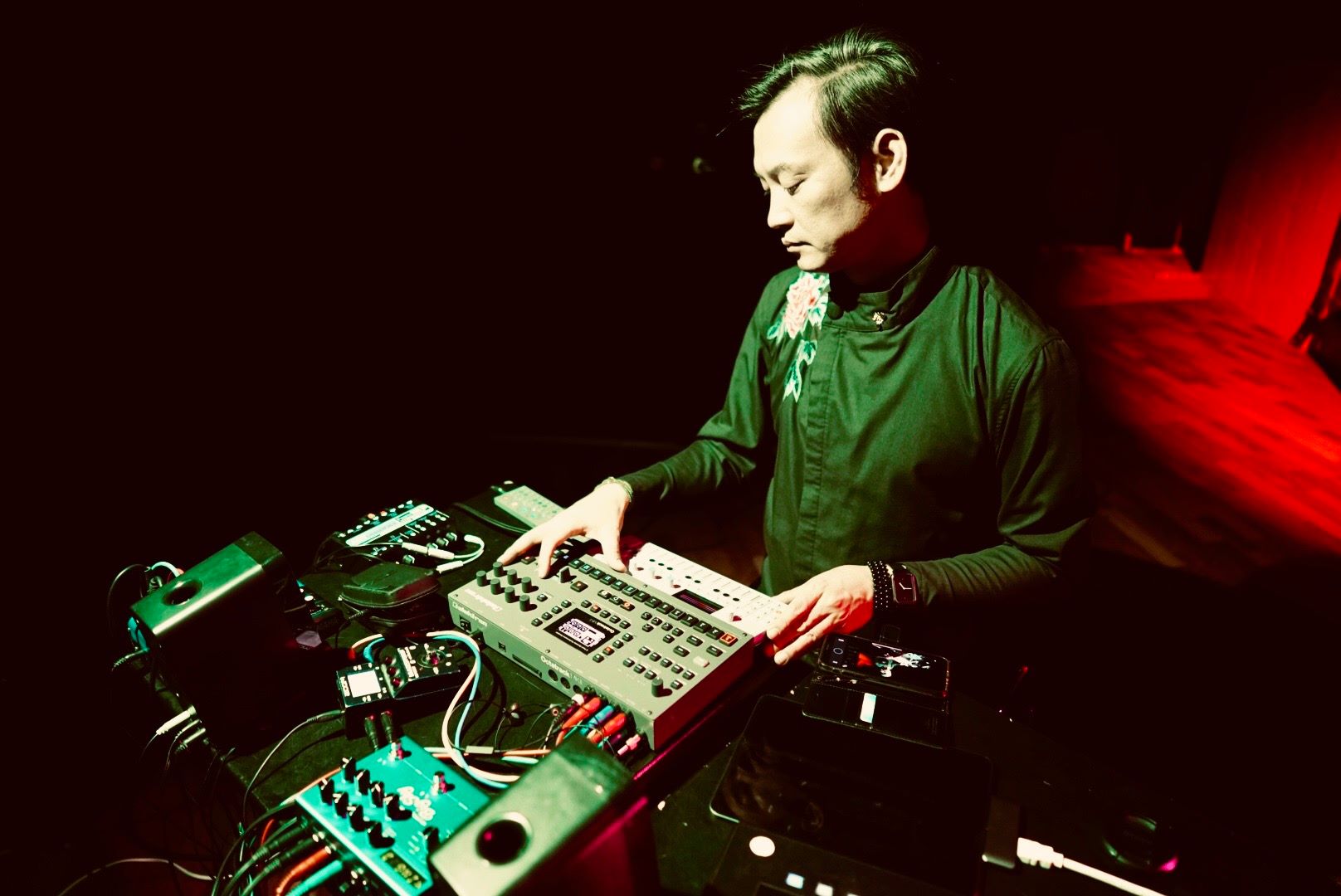 With the Vietnamese artist Tri Minh the popular saying “Jack of all trades, master of none” loses its meaning. Graduated with a composing degree from the Hanoi Conservatory of Music, Minh started to play and improvise jazz in the beginning of the 90s. He developed his career as a solo artist, and made a name of himself by collaborating with other international musicians, and also working alongside other renowned local artists. He is considered the first truly electronic artist of the country and praised as an avant-garde musician by merging new music styles with traditional Vietnamese sounds. He was also one of the main organizers of the Hanoi Sounds Stuff music festival in 2008, the first electronic festival in Hanoi.

And just as Tri Minh is constantly evolving and learning from new trends and absorbing external influences, Vietnam seems to have done the same in the last couple of decades. The country is in constant movement, and it’s moving fast. But just as Minh, without letting go completely of its oldest traditions. From the over thousand years of Chinese Domination, Vietnam took and still keeps the foundation of the Vietnamese way of life to this day: the paddy agriculture. From the French they adopted the architecture, religion, some words and most importantly the bread and the coffee.

So now we ask ourselves: where does the Vietnamese underground music scene take its way of life from? How has the music scene evolved? And what’s the role of the young Vietnamese people in this? Minh compares the youth from now and then, and how everything changed after the implementation of the liberal economic policies known as Doi Moi in 1986. This opening to the world has not only had a huge impact on the economy of the country, taking it from one of the poorest nations in the world with poverty rates over 70% to a growing economy with under 6% of poverty in 30 years, but also by giving new artists the chance to venture into new music genres.

Minh, how do you think the history of Vietnam has influenced its music scene?

The new Vietnamese music scene was born in the late 80s when Vietnam began to open its economy. Together with the open market policy, young people, at that time, were exposed to a different music culture and as a result, the electronic music came in. I was lucky enough to live and to start my career during those times.

In the span of 20 years, Vietnam has become a new destination for the development of electronic music. The X generation stepped in, and they have many interesting entry points where they just know what they are doing and they are good at developing their own skills.

This is a really interesting time: it combines different inputs from expat communities who reside in Vietnam. I personally think that Vietnam is in a very good position right now.

In your opinion, how is the current Vietnamese youth different from the youth of your early days?

One of the biggest differences between the two generations -the youth from now and then- is that young people now are in direct contact with the current trends of the youth worldwide, unlike the past, when we had very limited resources.

Until recent years, the music style options were only a few, therefore, the youngsters would get into rock, pop and disco. Now the young communities have a much wider range of choices, beside mainstream material like EDM or the pop chart. Nowadays, we have some very interesting choices such as experimental music, contemporary music and Indies. I think the youth now has a much better start.

What do you think are the strengths & weak points of the current underground music scene? And where does it stand compared to other parts of the globe?

To me the biggest difference between South East Asia – where I come from – and places like the EU, US and Japan, is that in these countries they have an organization to support the development of the underground music. That’s not the case in our countries, where we really have to find all the resources ourselves. Hence, this music scene is much more developed in the EU, US and Japan. But Southeast Asia is catching up very fast with many interesting festivals in Thailand, Indonesia, Vietnam and even Myanmar. I hope it will get better when all the young producers start to establish themselves in the music scene.

The world is developing very fast now with internet and the trends, and Vietnam is shifting alongside. Eventually, young producers and DJs will explore more in the direction of live performance.

Being an accomplished musician in many genres and a national treasure, can you tell us where the wish came from to explore electronic music and what your plans are for the future?

I am very fortunate that I was in the right time and the right moments. And one of the main reasons why I try very hard to push boundaries, is because I really want to put Vietnam in the world’s music scene map. After quite a few years of self development and exploring my personal limitations, I realized that I can not do this alone and so, I am working on many collaborations and workshops for the younger generation. I am confident that now they are in a very good position. Of course there are still many challenges and difficulties, but I think that with time it will get better and I hope there will be many and more successful people in Vietnam.

And last but not least, would you recommend any bands, DJs or musicians to our readers who are eager to get to know this rather unexplored music genre of Vietnam?

The project I’m working on right now is called “songs for the jungle”. It’s a music project in which, instead of playing music only for the human being, I am planning to play for the souls of the trees and the plants. By doing this, I am trying to raise awareness of the deforestation issue in Vietnam.

Therefore I am listening much to Ambient works by Nils Frahm, Joseph Shabason, Meitei, Jóhann Jóhannsson and lots of Ryūichi Sakamoto.

To get inspired too, check out this playlist we created with Minh’s recommendations.